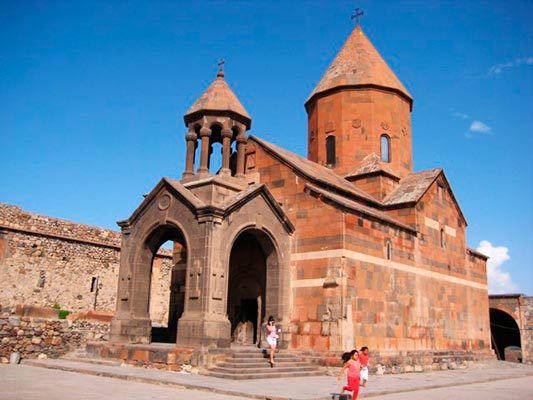 One of the oldest buildings in Yerevan – a church of Surb Astvatsatsin, which crowns the hill in the Nork district, rebuilt several times mainly due to the parishioners. Nearby are several charming Armenia hotels. The first failure in the face of the ancient building has made ​​a major earthquake in 1679, and engaged in the restoration of its residents from its arrival. The second time the church suffered during the Soviet rule. It did not destroy, but simply staged in warehouses, which, however, influenced no less scary for internal and external decoration of the temple. In the nineties the building was restored once again, this time at the expense of protection of monuments in the Armenian society. The church still captivates the beauty of strict and immutable harmony of external and internal decoration. It is possible to visit even in the low-cost travel in the country, a visit to the church does not require you to large investments.

Prayer hall decorate the altar only so two massive columns, and the walls are painted carved deep in stone beautiful ornaments of khachkars. One even flaunts its creator’s name, which called Keram. The temple can be reached from both sides, through the door, located on the west and south sides. The building itself – a rectangle, built of massive blocks of sand color, topped with a small bell tower.