Registration
Travel in Uzbekistan and Central Asia > Art of Armenia 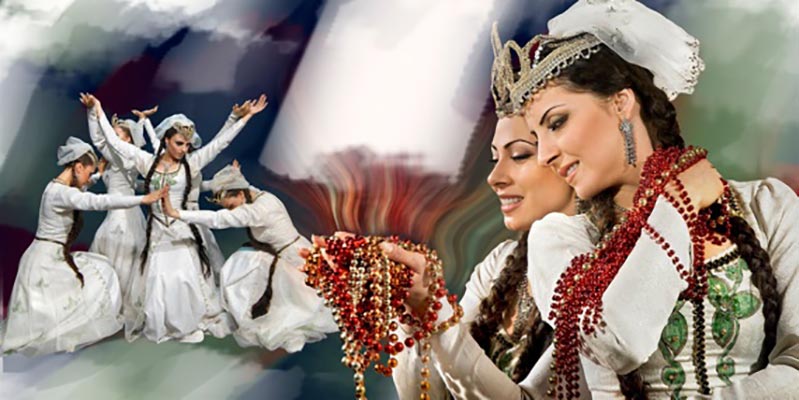 At decorative – applied art of Armenia deep and ancient roots. Weaving, carpet making, a pottery, lacemaking, the jeweller technics, creations and ornaments of house utensils are traditional employment of Armenians. With development of national crafts have passed to national arts and crafts. In all it ideas of forms and a colour variety are expressed. Gold and silver art among the population of the Armenian uplands was popular in II millenium BC.

Necessary household subject Armenians had a carpet. The carpet was used for laying tables, a covering of chests, seats and bed. Carpets were veils of doorways and altars in temples. The earliest carpets – ov vishapagorgi (carpets with dragons) which were popular in XIV-XV centuries.

Our time have reached pentaptych – reliquary, Vajots-Dzor, the end XIV – the beginnings of XV century, the Salary of the Gospel, XV century, the Karabakh carpet of “Goar” with woven inscription in the Armenian language, 1700

The architecture of Armenia occupies one of the main places in the Armenian art. Architectural constructions have reached us from depth of millenia and have kept on itself spirit last time. In Armenia a considerable quantity of ancient temples, monasteries and other architectural monuments for this reason Armenia name «a museum open-air». Each of architectural constructions differs the uniqueness and originality. Monastic ensembles of Armenia of medieval time are considered as the architectural base. They were created and reconstructed by centuries centuries, for example, Sanain and Ahpat were constructed within four centuries. In the Middle Ages of church and temples were decorated by mosaics. Some fragments of early Christian mosaics are found out in cathedrals of Echmiadzin, Zvartnots and Dvina.

Rich folklore at Armenians till 5 century legends made, mythological conversations, the Armenian alphabet has been created. In 405 writing has been invented by Mesropom Mashtotsem. A century later the Armenian literary art becomes history of “Golden Age”.

The earliest literary monuments in the Armenian language fall for 5-6 centuries To them historical products of Movsesa Horenatsi «History of Armenia» concern, Korjun of “Life of Mashtotsa”. Today these products and theological books are of great importance for the Armenian people and the nearby countries and the people.

History of the Armenian fine arts include a cave list, the rock paintings having 10000-year-old history, the most ancient monuments of primitive art of Armenia. The fine arts developed thanking Hellenistic culture. With XVII-XVIII centuries art styles of the Middle Ages are replaced by a new realistic method. Together with a miniature and art easel and portrait painting, thematic products and a realistic landscape develop. In interiors of temples painting by oil on a canvas, and also on silk and boards is traced. The fine arts of Armenia XVII-XVIII of centuries are marked by products of artists from a sort Ovnatanjanov. Thanks to it there are lines of realism.

In IV-XVII centuries in Armenia the Christian culture takes place. In IV century as ornaments of churches frescos and sculptures act. To this day fragments of frescos in Lmbatavank (VI century), in Talinsky church Katogike, in churches by Arucha, Kosha (VII century), frescos in church Surb Hach on island Ahtamar (921), in a temple of Surb Pogos-Petros of the Tatevsky monastery (930), in XIII-XIV centuries – in church Tigrana Onentsa in Ani, in monasteries of Kobajra, Dadivanka, Ahtaly, Ahpata are kept.

The Armenian musical art was born in XII century BC In II century BC, at the time of state Artashesidov board are extended military and ceremonial songs. Musical art of Hellinistic Armenia was made by vipasans (singers-storytellers), gusans and vardzaks (musicians-poets and actors-buffoons). After Christianity acceptance there was a spiritual singing art. To M.Mashtots and S.Partev have translated the Bible and Pataragamatujts (the Liturgy place), have ordered the musical party armenized ceremonies and rituals, becoming patriarchs of the Armenian spiritual song. They have implanted style of a raised spiritual song which in VII century has been brought to perfection by Komitasom Ahtsetsi, BarsegomChonom, A.Shirakatsi and S.Dzoraporetsi.

Stories of the Armenian theatre more than two millenia. In II-I centuries BC the Armenian kingdom was considered as one of the developed states of the world. In reign of Tigran of II Great (95-56 to н.). Armenia has reached the highest power. At this time has appeared Armenian hellinistic theatre. The first theatrical building constructed on hellinistic sample, has constructed tsar Tigran II Great (95-55 BC) in the new capital – Tigranakert in 69 BC Son of Tigran II – tsar Artavazd II (54-34 BC) in ancient armenian capital Artashat which Romans named «Carthago Armenia», has constructed a theatre building where performances of Ancient Greek authors were put.

Date of occurrence of the Armenian cinema falls for April, 16th, 1923 when the decree of Sovnarkom of Armenia at Narkompros had been created State cinema of Armenia Daniel Dznuni and Amo Bek-Nazarov were which organizers. The film “Namus” of Bek-Nazarova was the first film. Then Bek-Nazarovym have been shot films: “Zare” (about life of Kurds), “Has-Push” (about spontaneous revolt of the Iranian poor against oppressors), a zhanrovo-household comedy “Shor and Shorshor”, political satire “the Mexican diplomats”, a national-heroic comedy “Kikos”.