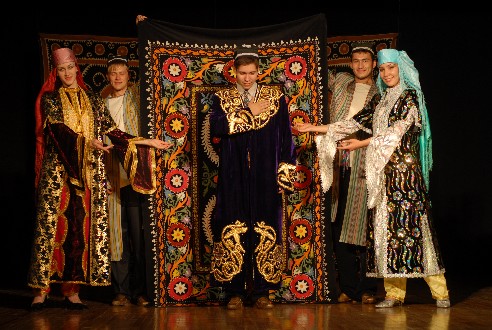 Theatre life of modern Uzbekistan is motley and diverse. Every evening auditoriums of 35 state professional theatres, including two opera and ballet theatres (in Tashkent and Samarkand), 10 is musical-drama, theatres of dolls hospitably fling the doors open. In Tashkent, Samarkand and Fergana Russian drama and musical theatres work.

Among leading theatres of republic: the Academic Uzbek theatre, Hamza, the State Academic Big theatre of A.Navoi, the academic Russian drama theatre of Uzbekistan, the Tashkent theatre of a musical comedy (operetta), the Uzbek musical theatre of Mukimi, “Ilkhom” theatre, Republican theatre of the young spectator.

It is natural that the majority of theatres is located in Tashkent.Such theatres as Drama theatre of A.Hidojatova, “Ilkhom”, Youth theatre of Uzbekistan fairly are considered as the experimental.

With finding of independence by Uzbekistan interest to a cultural heritage, spiritual treasures of the people has amplified. In theatrics the tendencies closely bound with changes occurring in the country were distinctly allocated. The theatre addresses to a drama heritage of writers of Chulpan, Fitrat, A.Kadyri, comprehends events, the facts and persons of a Russian history in a context of a new social reality. At the same time, the theatre conducts the strengthened searches of theatricality in circulation to national sources and traditions of national art culture, masters “the humorous world” Uzbek people, its vulgar entertainment elements.

Brightly and figuratively these searches were reflected in performances “Trick of Majsary”, “Iskander”, “Sohibkirop Temur”, “Chimildik” (theatre of Hamza),”There. Where horses” (Theatre for Young People). “Travel to Tashkent” (the Fergana regional theatre), “Constellation of the Omar Khayyam” (Youth theatre), in performances under early plays of Hamza and “Sheikh Sanan” of Karshi theatres-studios “Mulokot” and “Eski machit”.

Theatres actively react to increasing interest of a society to a life and activity of the largest persons of a Russian history. Such historical plays, as “Mirzo Ulugbek” “Alisher Navoi”, “Amir Temur”. “Tumaris”, “Nodirabegim”, “Bobur”, “Sobir Termezi”, “Alpamysh” and others are put. In variety of performances steadfast interest of art and a society to closer history – to a life of Turkestan of the beginning of the century – to the most interesting in historical, cultural, socially-psychological plans to the period was reflected.

Expansion of a circle of new ideas, increase of scenic culture in its modern understanding have caused style “cleanliness”, genre variety of director’s and actor’s decisions. Improvisation elements, refined stylisation, receptions of “poor theatre”, interest to sober drama vision of events and images are only some signs of updating of poetics of a modern Uzbek scene. New director’s generation actively searches for unbeaten ways of development, updating of old theatrical forms, aspires to be beyond habitual prosaic narration, conducts searches of synthesis leaving in depth of centuries of spiritual culture, national mental with figurativeness of a modern scene.

In the best performances the Uzbek theatre constantly addresses to the richest traditions of national music, the literature, the fine arts, architecture. So, in performance “Great silk way” of Theatre of Hidojatov director B.Juldashev and the artist G.Brim means of music, a plasticity, a choreography, light and colour synthesised an image of the countries of the medieval East on which the Great silk way layed.

Theatrical art support on the best cultural traditions, returning to a scene of ethnography, folklore, a national life, rituals – one of directions of modern Uzbek theatre which was showed in a number of performances of last time.
At the same time on scenes of theatres of Uzbekistan now go not only performances under plays and performances of prose of the Uzbek authors, but also classical products of Sofokl, Shakespeare, Moliere, O.Uajld, A.Strinberg, Z.Kokto, E.Ionesko, J. Steinbeck, F.Djurrenmatt, Sholom-Alejhem and other foreign writers of the past and the present.

The modern theatre convincingly shows harmonious development of culture of Uzbekistan – cultures unique, carefully storing the originality, but not closed in the national limits, generously giving to the world cultural wealth and opened to perception of the best achievements of mankind.