Registration
Travel in Uzbekistan and Central Asia > The embroidery 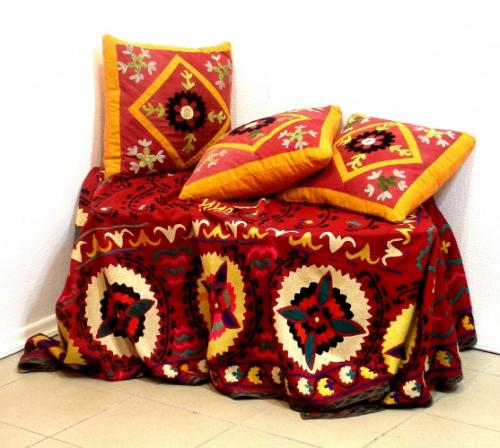 Embroidery schools first appeared in Uzbekistan at the end of 19th century. There were several schools that had similar features but at the same time were considerable different from each other. Similarities were in ornament and differences were mainly in colors and details of ornament and composition. One of the most distinctive embroidery schools were in Shahrisabz. Shakhrisabz is an ancient city in Kashkadarya Region. Shakhrisabz translates as “green town”, because there grew a lot of trees and flowers. The city belonged to Barlas clan. Amir Temur was one of the most famous representatives of this clan. The most well known historical monuments of that city are: Palace Oq-Saro, Mausoleum Dorus Saodat and Mosque Kok-Gumbaz. From 14th to 15th century the city was a cultural and administrative capital of Movarounnahr. Cultural development was driven by Amir Timur. He attracted many talented craftsmen and art people from different countries and settled them in Shakhrisabz.

Shakhrisabz continued to be cultural center in 19th century. Trade was good and culture was prospering. Large embroidery products were purchased by rich people. Small ones women produced for their own use.Since the buyers of the embroidery products were aristocracy, ornaments reflected their preferences. Embroidery together with other forms of art were influenced by the popular at that time Islamic art. That is why similar ornament can be found in architecture and in embroidery. Characteristic of that style is the widespread usage of foliage in decorating. Despite strong influence of Islamic art, traditions and cultural life of the region was of the same significance. Many embroidery ornaments were influenced by folk art.

One of the products of embroidery is a syuzane. Syuzane produced in cities usually had circle made of flower and foliage images in the center. Other distinctions were plenty of flowers and foliage and wide frames that were thoroughly decorated. The frame usually had three parts: wide central frame and two additional narrow frames. The same composition was widespread in carpet decoration. Generally this composition is copied from carpet decoration.

As a material for embroidery decoration was used cotton, silk woolen fabric. Urban embroidery had higher quality. Shakhrisabz embroidery makers favored kanda-khayol type of stich. Together with this type of stitch they used others such as yurma, iroki and basma. Comparison of Shakhrisabz, Nurata and Bukhara embroidery showed that masters of all three cities preferred using a lot of images of flowers and foliage. That was not a coincidence. Bukhara as a capital of the emirate influenced other regions in many ways, including art. The difference between Shakhrisabz and Bukhara embroidery is that in Bukharian masters used more composition options. Distinctive feature of Nurata embroidery is a panel that was left blank. This blank panel highlighted ornament and made them stand out. Shahrisabz masters in contrast, left almost no empty spaces and made equally allocated ornament so that only small pieces of fabric were without ornament. Shakhrisabz masters used combination of large and small images and figures.

Shakhrisabz embroidery has distinctive feature of having versatile forms of any kind. The logic behind the ornament with plenty of flowers and foliage is that rich flora is a sign of prosperity, life, nature and spring. In general, the richer the flora on embroidery, the more positive moments the product is going to bring. That’s why masters did not like to leave empty spaces and excessively used ornament. Another reason for masters to excessively use flora in embroidery is that Shakhrisabz was a beautiful place with rich flora. The city flourished with great variety of trees, flowers and plants. As a result, this pattern given by nature was used in their works.

Floral elements were of greatest significance in Shakhrisabz syuzane. Seamstresses paid extra attention to these details. Usually syuzane had a large flower in different perspectives. Every flower was unique. It was usually placed inside a circle frame of leaves. This technique gave richer and more colorful results.This device, incidentally, was also borrowed from the professional artists. Flowers and plants were very popular among masters of other types of art. Often decoration of buildings included images of flowers. For embroidery many craftsmen used floral motives. Despite this, difference was reached by professional and different embroidery techniques. As mentioned above, all the elements were unique.

This tendency of using floral images was not only in embroidery and architecture. This was popular among many other artists and craftsmen from different art areas. Usually products of Shakhrisabz embroidery were framed with chahar-chirag ornament. Chahar-chirag translates as “four lights”.This ornament received its name because it looked similar to the form of a lamp that people used daily. This ornament consists of a flower surrounded by leaves. This ornament is typical for ceramic items of Amir Timur age. This motif is frequently encountered on ceramics of the Timurid period. Sometimes, design on the edges of the embroidery product switches from chahar-chirag to large palmette of floral ornament.There is one more design to decorate eges of the embroidery, called Herat. This design consists of a large palmette with floral motives that is located on the two sides of the section.This design was developed in 15th century. Right from the beginning of its existence this ornament style became popular and started to spread throughout Central Asian countries and Middle East. Development of this ornament took place at the time of Timurids’ Empire. Examinationof Shakhrisabz embroidery patterns show that the art of Timurids’ Empire played significant role in development of Shakhrisabz embroidery.

Among excessive floral images of Shakhrisabz embroidery it is hardly seen from the first sight graphical ornaments. But closer look allows distinguishing such graphical ornaments as: qumg’ons, pomegranates and cockerels.For example, one of the most well known and researched piece of Shakhrisabz embroidery is exhibited in Tashkent State Museum of Art. This piece was produced at the end of 19th century and is widely discussed in today’s media. The syuzane attracts so much attention because it combines floral, graphical ornaments together with inscriptions in Arabic language. This embroidery was a wedding gift for a girl and inscription translates as good wishes for that girl. The syuzane was made of violet silk piece of fabric with silk thread ornaments on it. It has classical composition: in the center there is a large medallion,and floral ornament in the middle panel corners. Outside frame is decorated with flowers surrounded by leaves. There is another medallion that is smaller in size. It is decorated with qumg’ons and cockerels. This embroidery is unique as a product. Moreover, every ornament that was used for decoration is unique. The syuzane consists of many original ornaments that do not repeat.

Decoration of this syuzane is deeply connected with traditions. Every element has its own background. For example, there are small birds around central rosette with trident crests at the top of their heads and backs. Tridents symbolize lamps that in times of Zoroastrism were attached to the birds’ backs. According to Zoroastrian believes, these birds were sacred that’s why housholds kept their sculptures at home. These sculptures of birds were used as lamp bases. That is why in the decoration of syuzane there are birds with tridents. This tradition does not exist any more and only art objects remind us about it. Images of similar birds with lamps were found on Turkmen carpets and jewelry. In addition there were clay toys, sculptures of birds with lamps.

The fact, that Shakhrisabz embroidery has these birds as an element of decoration tells that people in Shakhrisabz followed traditions. These birds with lamps symbolize protection. The birds itself is a sign of fertility and sun. In this case, circle, in the center of the syuzane exhibited in Tahkent State Museum of Art, is the interpretation of the sun. Flowers along the edgewith almond images also symbolize the sun. There are even more elements that symbolize the sun. Considering that this syuzane was a wedding gift, we understand excessive use of details that represent fertility, protection and prosperity. The composition of syuzane in general is a wish of bright and secure family life.

Another field of embroidery masters was decoration of robes. As a piece of cloth that is exposed for public view, rich people tried to show their solidity wearing bright robes. Shakhrisabz robes were mainly fully decorated. A combination of several colors was used to make the cloth bright and eye catching. This was considered as a sign of wealth and prosperity. Embroidery masters usually used yellow colors for background and red colors for details.

Decoration of robes generally consisted of flowers and plants. There were images of vases with flowers and flowers inside different items. These flowers were the key elements of the decoration. One element is similar to almond shape or the shape of flame tongue and a leaf. This element is called bodom. It has Eastern origins. People of the East believed that this element has some meaning. Bodoms were presented in many different ways. For example, in form of a leaf that consisted of two pats. One of them was red with yellow strips, the other was white with small red bodoms on it.

The same ornaments were used in decoration of horseclothes. Horses were considered as a sign of wealth as well as clothes. That’s why owners tried to take a good care of horseclothes. Often horseclothes due to similar ornament complemented the robe and looked as an addition to the rider’s robe. A german schientist, Von Schwarz, who visited Turkestan at the beginning of 20th century, was impressed by the horseclothes. He described his experience as exciting and uncomparable with European style. According to Von Schwarz, he saw popons with golden embroidery that were extremely expensive and at the same time beautifully decorated. After his visit to Turkestan, he said that European works are far less bright and rich in decoration than Central Asian works. In his opinion, this could be due to the fact that nature in Central Asia was so rich and the weather so sunny, that artists took their inspiration from that.

Seamstresses mainly used just several colors, but managed to combine them so skillfully to create versatility and interesting designs. There were certain color combinations that were the most demanded. They are: raspberry red and dark blue; raspberry red and light blue; yellow and bright red. When late in the 19th century new colors were developed and became available for embroidery, works lost its original colors. During this time, Shakhrisabz embroidery were tested for following cultural traditions that were set during Timurids’ Empire.