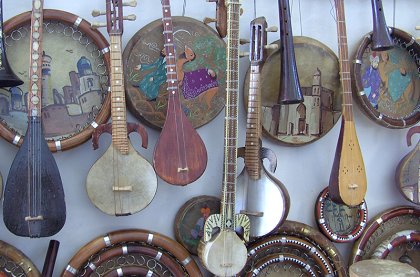 Among first exhibitions in this new art palace was exhibition called “The Preservation of Shashmaqom”. It was organized by UNESCO in December 2006. UNESCO, with the help of Japanese Trust Fund, organized this exhibition to preserve Central Asian classical music. The exhibition consisted of collection of different traditional music instruments. This collection traveled from Tadjikistan to Uzbekistan. Majority of exhibits were borrowed from Tashkent Conservatory and other organizations across Uzbekistan. There were works of modern masters such as: A. Madraimov from Andijan;S. Otamuradov from Karakalpakstan; Bukharian master O. Mukimov; D. Mamatkulov from Surkhandarya; Tashkent masters M. Yunusov, T. Ubaidullaev, A. Zakirov; S. Mamadaliev from Fergana and R. Yusupov from Namangan. Representative of Tajik music instruments production was Sh. Khajiev.

Not long ago there were also famous masters who made music instruments. The most well known of them was U. Zufarov.The masters that presented their works at the exhibitions along with works in traditional form or shape, exhibited new types of instruments. Such instruments they invented themselves and are not known by public.

During the exhibitions there were displayed three major groups:

Abdumalik Madraimov also presented a set of musical instruments for children. The set included 9 instruments: dutar, tambur, rubab, soz, doira, konun, kushnogora, safail and takhtacha. He also offered instruments that use ensembles and orchestra:gijjak, rubab, alto-gijjak, chang, tanbur, prima dutar, bass-dutar, dutar, sato, tambur, ud, konun and some other.His works are unique. They have outstanding decoration and beautiful forms. A lot of masters exhibited Indian or Japanese sadaf. Abdumalik Madraimov covered his sadaf with shirlak. Shirlak is a special type of lacquer that gave the musical instrument yellowish color. This color in combination with brown resulted in an outstanding color. This color distinguish sadaf made by Madraimov from others.

Mukhammadnazir Yunusov also participated in the exhibition. M. Yunusov lives in Tashkent. He created new type of musical instrument and presented them during the exhibition. He called his creation “manzur”. While making this instrument, the master took as examples two other instruments such as: tanbur and tor. The instrument has seven strings; it can be played with mediator. Manzur is equipped with two resonators. One is covered with leather and the other resonator is made of wood. This allows using the instrument at variety of temperatures without loosing sound quality.

Mukhammadnazir Yunusov always gives his inventions to a famous musician, Ulmas Saijanov. Ulmas Saijanov actively cooperates with the master and tests his instruments. Then Saijanov writes music specifically for that type of the instrument. After Ulmas Saijanov approves an instrument, Mukhammadnazir Yunusov starts producing more instruments of this type and then offers to other musicians. If the sound of the instrument doesn’t satisfy requirements of Saijanov, he tells the master what is wrong and how the problem can possibly eliminated. As M.Yunusov says, this cooperation is very helpful and gives a lot of effective directions.

When the instrument is approved for production, technical questions should be decided. Technical processes are very significant. Depending on what type of timber is used and how it was processed, the instrument changes its qualities. Usually masters variety of wood types. Most popular are: walnut, mulberry, apricot and some other fruit trees. If masters use fruit tree as main material, the instrument will have even and clear.

Before the timber could be used for instrument production, it should go through different, time and labor consuming processes. Not every tree can be used for production. For this purpose it is better to use timber of not too old trees. First of all trees are sorted and selected trees is cut to make timber. After that timber is left in water for some period. Water should be running. In this case, water penetrates the timber deep inside and cleans it from insects, pests, gum, etc.

When timber is clean, it should dry up. The degree and quality of dryness shows the quality of the timber. The higher the degree, the better is considered to be the quality. The higher the quality, the higher is the price. Classical way of drying is in natural conditions. For more effectiveness timbers are positioned vertically. The process seems easy and quick. But actually it requires a lot of attention and takes on average between ten and fifteen years.

Khorezmian timber producers use mainly different method. They put timber in hay. Masters use brown hay. The hay after some time colors the timber and gives interesting decorative result. This technique is still sometimes used.

Quality of the timber is one of the most significant criterias of instrument quality. That’s why great attention is paid to this timber preparation stage. When timber meets high standards requirements, the instrument that is made out of it will serve for a long time and will produce beautiful sound.

After instrument’s body is ready, masters work on the sound of the instrument. This process is requires high concentration from the master. This work is very labor consuming. To tune the instrument, masters should distinguish every subtle difference of a sound. Without this ability tuning does not make sense. Everything depends from the master here. That’s why talented masters are so appreciated.

One of the guests at the exhibition in Tashkent was Shirin Khajiev. Shirin Khajiev is a citizen of Tajikistan. He presented a lot of his works. There were: children, afghan and regular rubabs; surnai; dombra and other instruments. The most interesting item out of Shirin Khajiev’s works was “talvak”. This instrument looks like usual Uzbek nogora, but its body is ceramic. Its neck is long and has a leather membrane at the top of it. The body of the instrument has spiral shapes and floral ornaments as decoration. When asked, Shirin Khajiev was not able to explain the meaning of such decoration. But he said that he saw similar ornament as decorative patterns of ancient works. This is quite common. Very often authors do not know the meaning of ornaments they use for decorating their instruments or the shape of the instrument.

Below are some of the terminology that was discussed in this article:

Afghan-rubab. This instrument is so narrow that is approximately several centimeters wide. By both sides of its body there are falciform hollows. Leather covers resonator. There are one single and two paired strings. The instrument is played with mediator.

Gijak. This instrument is several centimeters wide. Its resonator is made in shape of dome. The resonator is covered with leather. There are four strings. It is played with a bow that is called “kamon”.

Doira. The instrument has wooden body. From one side covered with leather. It is something like a drum, but with one side left open.

Dumbira. An instrument that has two strings and is made in a shape of a pear. Its resonator is covered with wood. It is played with hands.

Dutar is an instrument has resonator of pear shape. The resonator is covered with thin wood. There are two strings that are stretched along a long neck. It is played with hands.

Kashgar rubab. This instrument has resonator in shape of a dome and covered by leather membrane. There are one single and two paired strings. It is played with mediator.

Konun. Its body is made of wood. There are a lot of steel strings. To play konun, artists wear special item on their index fingers.

Sato. This instrument has long neck and usually three metal strings. It is played with a bow.

Tanbur. This instrument has a resonator in form of a pear. There are three strings and one long neck. It is played with a metal mediator.

Ud. The instrument has deep and large resonator. The resonator is covered with sounding board. It is played with a plastic mediator.

Chang. It is an instrument that has wooden body and a lot of metal strings. It is played with bamboo or reed sticks.