Registration
Travel in Uzbekistan and Central Asia > DESERTS OF UZBEKISTAN 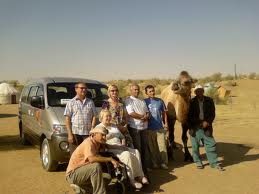 Central Asia is considered an area that is included in the arid zone of the Earth, and Uzbekistan, as is known, is located in the center of Central Asia. The north-western part of the territory of the Republic of Uzbekistan is filled with plains of the Turan lowland, a much smaller part of the republic, the southeast, – the Tien-Shan and Alai mountain ranges. Typical landscapes of the region are deserts, mountains and tugai-reed thickets in river floodplains.

The Karakum is a very extensive pasture. Karakul sheep, goats and camels are grazed on pastures. Pastures are used mainly year round. There, where new flocks of sheep are grazed, create reserve fodder funds, and also construct new wells. In order to expand the area of ​​agricultural oases and irrigation of one of the parts of the desert, the Karakum Canal was created. The agenda today is the introduction of pasture rotation, improvement of pastures, prohibition of cutting for saxaul and shrubs.

The Kyzylkum desert area is a plain with a slope to the north – west with a height of 300 meters to the south – east and 53 meters to the north – west. The area has closed depressions and mountains that are isolated – Bukantau, Kuldzhatau, Tandytau and others. The mountains are strongly dissected by slopes, deserted, with hornfelses, granites, limestones, with peaks aligned. A huge part of the desert is occupied by sandy arrays. They were formed from the sands. Semi-fixed sands. The relative height of the ridges is approximately 75 meters. The plain spaces are composed of clay and sandstones.

In the famous Kyzylkum desert, small cattle are grazed, mainly karakul sheep, as well as horses, cattle, and of course camels. The creation of new wells in the desert has allowed at times to increase the number of livestock. In the central as well as in the southwestern part of the desert there are large basins (artesian). Here is a very developed melon culture, agriculture is developing, special experimental stations have been created. The work of these stations is aimed at providing livestock feed.

The canal (from the Chardara reservoir) to the Syr Darya was conducted deep into the desert, which made it possible to develop part of the land (desert) under orchards and vineyards, as well as rice fields.