JADE HEADSTONE OF THE GREAT EMIR 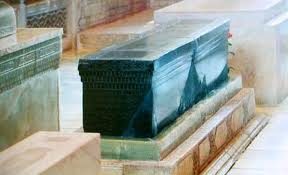 The mystery of the jade headstone causes a great many questions and disputes among historians. It is still available for visitors to view it, and special Samarkand tours are organized, which will allow you to look into the tomb of Gur Emir and see the tombstone with your own eyes. In accordance with the Chinese popular belief, Jade has a divine power, so in the yard of the Chinese emperor, a plate made of jade was in the honorable place. We have not reached the exact information about how and when exactly this plate was taken out of China. But the fact is that one part of the slab got to Ululgbek’s hands in his battle with the Mongols in 1425. The stone was incredibly heavy, unremovable. A special wagon was constructed for it. The stone was broken in two slabs during its transportation. And the best Samarkand masters, by means of a complex adjustment, they managed to connected them together and put a tombstone onto Timur’s grave. It survived to the present day, but had to go through a lot.

Iranian Shah Nodir during his conquest of Bukhara Khanate commanded to bring the stone and deliver it to the city of Mashhad together with metal gates from the mosque Bibi Khanym. He intended to make the floor and wall cladding in one of the holy buildings in the capital of Iran. Once, at a night dream he saw the spiritual teacher of Timur Mir Seyid Bereke who has appeared and told him to put that stone back to the place, from which it was taken out. The next morning scarcely awakened, Nodir commanded to return the stone to Samarkand and put it to its former place. On the way the stone was split into two pieces again. Nevertheless, the stones were delivered. And again the masters skillfully combined two pieces into one whole. Then they placed the stone on its former place.