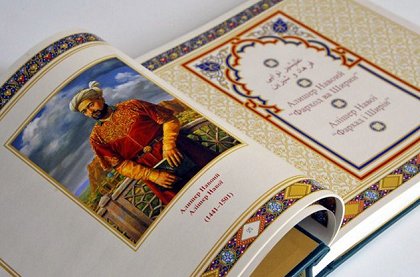 National library of Uzbekistan named after Alisher Navoi belongs to the thesaurus of cultural-and-historic national heritage of the country. Being one of the largest and oldest libraries of the Central Asian region, it possesses the most complete collection of publications of the national printing and is a real treasurer of book collections in many languages of the world. It was established in 1870 as Tashkent Public Library and having deep historical roots, it became the first state publicly-accessible library in Uzbekistan with unique book-stocks, truly cultural-and-educational, informative-and-documentary establishment. The most prominent statesmen, public persons and scientists who are the pride of our Republic, used to work and gain knowledge within the walls of the library.

Today, being the National Library of the state (the new status was awarded in accordance with the Decree of the President of Uzbekistan “About improving the organization of the scientific-research activity” dated February 20, 2002 / No. Y11-3029 and Resolution of the Cabinet of Uzbekistan “About establishing the National Library of Uzbekistan” dated April 12, 2002 / No.123) – it stands out as one of the leading allies to the national science, literature, art, to creative research of new generations of the Uzbek clerisy – inheritors of the great ancestors of our nation, who rest upon the immortal heritage and universal values kept in the library’s multi-million stock.

At complicated curves of historic development, the library has saved the link of times, our great heritage imprinted in the books; it has carried the truth of enlightenment, having enriched the people with modern knowledge for upbringing the future generations.

Following the traditions, the library has always served for the future of Uzbekistan by keeping and enriching the priceless heritage handed over by our great ancestries and has stood by its main mission, which is collecting, keeping and presenting for a public use the most complete collection of the national documents as well as the unique universal stock of scientifically valuable materials reflecting the wisdom of humanity and, above all, having relation to Uzbekistan and to its national interests.

At present time, the library’s total stock makes up 10 mln. copies of documents in more than 75 languages of the world, out of which more than 3.5 mln. copies is the collection of national printing kept in the National Book Chamber, about 2 mln. copies is the collection of technical literature and scientific-technical information. Averagely 25 thousand copies of publications from various sources of acquisition join the funds of the library each year. Beginning from 1956, the library has been carrying out international book-exchange; more than 30 organizations from 24 countries of the world are being its partners.

Highly valuable and rare editions stock is a pride of the library’s book collection; it comprises more than 250 thousand publications, including 16 thousand rare books and manuscripts which have been separated to an independent stock of rare and manuscript books department. Special place in the collection of valuable editions in the library is given to the unique “Turkestan collection” in 594 volumes – an original encyclopedia on history, ethnography, geography, economy and culture of Central Asia up to 1917, as well as “Turkestan album” in 4 parts and 10 volumes, describing the way of life and morals of the Turkestan area population, which includes more than 1200 unique photos.

Publications about the Republic’s history attract big interest of the researchers – this is literature of the regional topics of the XIX – first quarter of XX century, first Turkestan lithography, periodicals, manuscript books collection, various editions of the holy book – Koran. From black-letter Russian books, the library possesses the first Russian book of secular content, printed in church-slavonic type in 1647, Moscow city “Teachings and stratagem of warrior-host forming of infantry forces”; the books of the Peter’s epoch – “Arithmetic” (1703) of Leontiy Magnitski, “Khlinovsk manuscript” and others. Rarities of collection of the Western-European books include: “Eastern library” of B.Erbello, published in Paris in 1697; publications of the XVI – XIX centuries on the art of war, history and ethnography of the world’s countries.

The history of the Republic is rich with glorious names. We do honor, admire and take pride in the great ancestors of the Uzbek nation – Al Bukhari, At Termizhi, Akhmad Yassavi, Bakhovuddin Naqshbandi, Al Khorezmi, Beruni, Ibn Sino, Alisher Navoi, Amir Temur, Mirzo Ulugbek, Babur. They have put themselves on record in the history of the world culture, their works have become priceless property of the whole mankind and are carefully kept in the Library’s stocks.

Beginning from 1998 the Library started automation of the library processes, beginning from 1999 – creation of electronic catalogue for the new national and foreign publications using the automated library information program of the State Public Scientific Technical Library of Russia named «IRBIS».

Being a cultural center, a true treasury of idea – the Library has been assigned the function of center of the spiritual dialogue. The National library of Uzbekistan has acquired the international recognition as well. It is a member of the largest international library organizations, including: the International federation of library associations and establishments (IFLA), Noncommercial Partnership of Library Assembly of Eurasia (NP LAE). The library has set close professional and creative contacts with international organizations, funds, foreign Embassies accredited in Uzbekistan which make the invaluable contribution into the issue of rapprochement of the nations with various cultures, beliefs and historical roots. The Library has signed a number of Agreements, Memorandums and Protocols with National libraries of Poland, Iran, Arab Republic of Egypt, Russia, Kazakhstan, Ukraine owing to which there is carried out mutual information interchange and coordination of library cooperation.

Today, the activity of Library is wide and multisided. By tradition, scientific-practical conferences, meetings with the clerisy, professional seminars, round table discussions are organized in the library’s reading halls. There are also arranged book-illustrative exhibitions from the richest stocks of library as well as photo expositions, art exhibitions and presentations.