LEGEND ABOUT THE CONSTRUCTION OF THE MOSQUE BIBI KHANIM 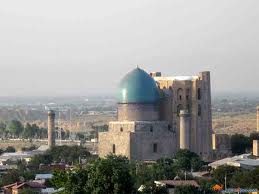 Surprising facts sometimes amaze with the mysterious originality of Samarkand mosques. If you travel in Uzbekistan, it will be fascinating to get acquainted with its legend.

The story about the construction of this mosque is quite interesting. Bibi-Hanym was Timur’s favorite wife. He considered her as the most beautiful woman in his big harem. One day, when Timur went on a military campaign, his wife decided to make him a present. The present was unusual. She planed to build a mosque and thus, to perpetuate her husband’s name. The idea was to build such a mosque, so that it would be superior to all existing mosques by its splendor and size. She had funds to build, and she ordered the workers to start construction. The work immediately started. It was supervised by a young architect. Masters and workers worked with perspiring faces for days and nights. The architect, who led the construction, was so fascinated by the Queen, that without remembrance fell in love with her. The mosque was built quite quickly and only one arch-portal was to be completed. Bibi-Hanym was hastening the architect. Her purpose was to finish the mosque before Timur’s return from the campaign. But he seemed not hurry at all. Being in love with the Queen he knew that the completion of the construction meant that he would never see her again. Soon, Timur sent a notice of his forthcoming return. Bibi — Hanym urged on the architect again looking forward to the end of the construction of the mosque. The architect made up his mind to tell the Queen that he would complete the construction if she consented to his kiss. That made the Queen very angry. Did this architect forget who she was? But the architect did not surrender, he was too much in love and out of control. Then, Bibi-hanym brought him a few eggs. The eggs were all of different colors. And she said to him that all women are diverse outwardly but their inner side is the same. And she promised to give him any of her slave women. Then, after plunging in a short thought he brought two cups, put them in front of Bibi-Hanym and said that two cups are of similar kind. But in one cup there was ordinary water but in the other wine. If I drink for the one with water, I will not feel anything, and if from the other one, I will get burned. This is the meaning of love! That was what architect told her. She had no choice but to accept the kiss, as she knew that Timur was coming back. While exposing her face for the kiss, she covered it with a pillow. The kiss was very ardent, it was so burning that made a mark on the Queen’s face-a big red spot. Timur returned and was surprised by the beautiful present of his sweetheart wife-a great building. However, in accordance with the legend, Timur noticed a big red spot on the Queen’s face. What was further uncertain, but there are two versions:

In accordance with one version, Timur had found out what the architect did and waited for his excruciating death. Knowing this, the architect climbed one of the minarets. And when Timur’s disciples rose up after him, they met only one pupil who told them that the teacher had made his wings and flew away forever to Mashhad.

According to another version, Timur guessed everything what happened, but did not show his anger. He ordered his masters to

build a tomb under the ground, so that by its superiority no one could compare with it. And ordered it to make a marble pink color sarcophagus and a tombstone of black Jade. And he ordered to carve a recipe of glaze for the domes on that stone. After the construction was completed, Timur killed the architect and buried him in that tomb. Then he ordered to immure the entrance. Lots of years passed and, once, the grandson of a great chronic, replenished the library. But after Ulugbek died, the scheme of entrance to the tomb was lost.

That’s the legend. The information that Bibi-Khanym was the wife of the great Timur was reliably reached to us. And we also know that Timur himself has ordered to build the mosque for his youngest wife. And that mosque was one of the most important mosques in the city.