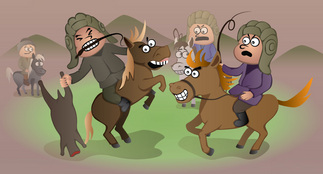 Throughout many communities national games were played with a purpose to have fun also educate people in such extraordinary way.

Despite other educational methods, folk games held in competition format either gave possibility towards take part for everybody. Youngsters learn to develop their mental qualities, physical strength through such tournaments popular among Uzbekistan group tours.

From ancient times national tournaments reflected population’s lifestyle. Through participation within competition they could show their abilities including: experience, courage, hardiness, rapidity creativity, other qualities, skills.

Since older times, throughout weddings or different great holidays, Uzbek citizens organized competitions for entertainment, where participants experienced strength together with agility.

Competitors do not need any special flooring as they fight outdoors, but sometimes big carpets cover the ground. Everybody can participate in contest, including: elder people, youngsters, experienced fighters and beginners.

Sheep fighting is another contest among animals, where viewers can express their emotions through whistling, stomp, cheering sheep, buzz.

Additionally, there are numerous traditional games like chavgon, kyz-kuvdi, teng keluv, olomon-poyga, ogdarysh and many others. All above mentioned games are equestrian, very excited, either dynamic.