Registration
Travel in Uzbekistan and Central Asia > HOW WAS THE TOMB IN GUR-EMIR OPENED?

HOW WAS THE TOMB IN GUR-EMIR OPENED? 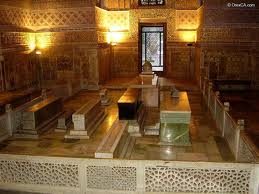 The incredible facts sometimes make you think hard about the correctness of the decisions that we take. Visiting Samarkand together with the planned Uzbekistan tour, you will definitely see the tomb of Gur Emir and learn a lot about its amazing history.

In 1941 a scientific expedition started its work in Tashkent in June. The work was aimed at opening the tomb of Timurids.  An autopsy under the direction of Mikhail Gerasimov and Tashmohammed Kara — Niyazov was launched. The Temurids built their personal mausoleum Gur emir, so they didn’t have to dig the ground. Local residents, as well as mullahs tryed to prevent excavation, but the team continued its work. Soon, the team reached the tomb. In the commission there were also such famous personalities as A.A. Semenov (who was orientalist), historian Sadriddin Aini, M.M. Gerasimov. The excavations were under video filming. It was headed by a young cameraman, Malik Kayimov.

It all started on June 16. First were uncovered the children’s tombs with the sons of Ululgbek. The second tombs with Timur’s sons Miranshah and Shahrukh. The Luftwaffe, At the same period of time on another territory, aircraft would operate and soon the deadly cargo shall be sprinkled on innocent children of the Soviet Union.

June 18, The remains of Ulugbek were extracted. Ululgbek was Timur’s grandson.

June 19, it was the date of removal of the heavy tombstone from the tomb of the Great Tamerlane. And at that time, under the gun of German troops, the western border areas of the USSR were ready for the battle. Waiting for the command.

On June 20, the “Leningrad Pravda” newspaper reported that the quotation — “People’s legend, which has survived to this day, attributes this stone to the cause of brutal wars…”— wrote the correspondent. This is a fantastic belief, as if the movement of stone could cause a war in the world, then many readers were amused. As it turned out, for nothing.

The tomb of Timur was opened on June 20. And on the night of June 22, the war began. For everyone-very unexpectedly.

On December 20, 1942, just in the midst of the Battle of Stalingrad, Stalin commanded to return the remains of Timur and the Timurids back to their tombs. However, it is worth to take into account that the Second World War by that time was lasting for over a year and a half. Yet it began as early as September 1, 1939, by German attack on Poland. Although, the coincidence, you should agree, quite entertaining…