Traditional Tadjik meal, which can only be conventionally attributed as porridge. Customarily, khalisa prepared for particular celebrations. Cooking kalisa consists of three operations that are performed simultaneously. High-quality spring-wheat sort, thoroughly washed, poured with water, subsequently boiled for 1.5 hours. Then they throw back on a colander, after which somewhat dried, not containing enough moisture grains, pass through meat-grinder with little grill. Received thick mass is transferred into enamelled dishes and covered.

In a separate boiler boil meats (better than lamb, but you may use beef or veal), removing foam from the surface of broth. An hour past boiling, add finely chopped onions, afterwards, keep cookin’ for another two-three sixty minutes. In meat-boiler lower obtained wheat-mass, carefully stirred, so that not tolumps formed, eventually simmered for three-four hour, stirring occasionally. Khaliesa must be weak salty, because when served it’s usually sprinkled with powder-sugar mixed with cinnamons. Ready-made khalissa put on dish, top pour kayla.

Keyla is cooked like this: meat’nd shallots are passed throughout meats-grinder, fried in different skillet in hot oil together with sliced carrots plus pre-soaked chickpeas. Then add some aqua, thereafter boil until completly ready, then salt’nd glove. Be sure to visit Central Asia tours, there would be an opportunity taste this national gastronomic masterpiece. 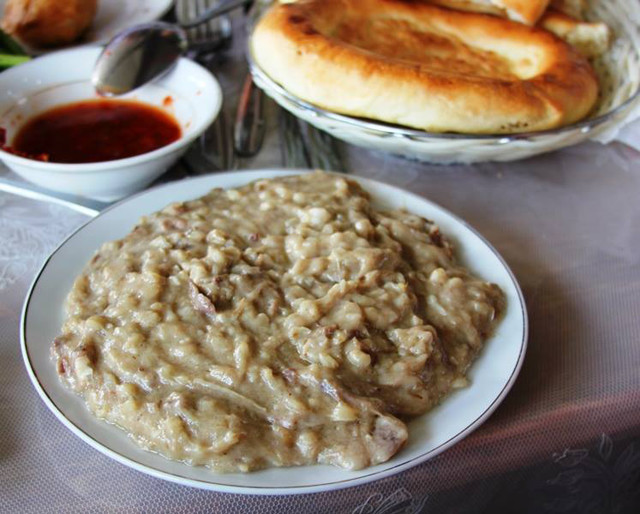