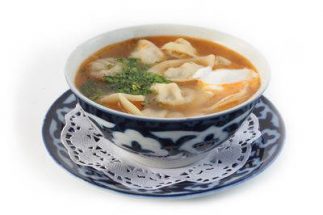 Everyone knows meal called dumplings, in cuisine of any country anybody can find echoes of this universal gastronomic product. East’s no exception. However the difference isn’t only in name, but also in cooking intricacies. Traveling along Uzbekistan tour itinarary, anyone often heard about chuchvara, this’s both soup & second course inside one plate. Let’s take a look at it together, someone might want to cook it at home.

Chuchvora making:
Knead dough-mixture using wheat-flour, eggs, certainly pure-water. Allow dough-paste infuse – presumably forty minutes. Whenever dough’s inininated – roll it out in small strips, comparatively two millimetres wide, then cut each strip into compact cubes, each square put some stuff, edges to pinch, so that when simmering dough-mass would not spread. Pass onion’nd meats through meat-grinder. Insert peppers, salts’nd water-liquid to mass. Mix properly. Once chuchvara’s completed, you should lower it into boiling-water. Blanch over low heat for seven minute. After chuchvoara pops up – input spices as well as salting. On table chuchvera is served with meat-broth seasoned with sour-cream or sour-dough. Sprinkle with freshly chopped-greens for flavor, likewise beautiful dish decoration.