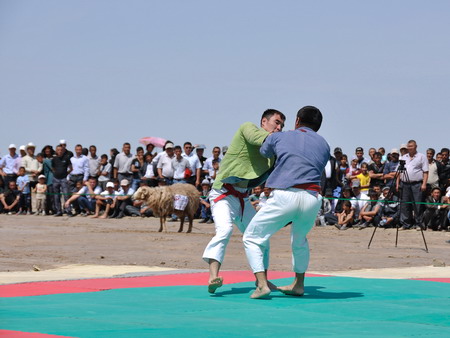 Uzbek people were known for their strong wrestlers, called palvans. They participated in the formation of Uzbek national sports. Among them are: turon, boyqurgan, kurash and belbogi kurash.

With independence of Uzbekistan, a lot of opportunities for further development of above mentioned national sports opened. Uzbekistan was able to share its sports with the rest of the world.
Every country has its own national sports. For example, in Japan they are: karate, judo and sumo. In Korea they are: sirim and taekwondo. China is famous for its wu-shu and in USA originated popular in the world basketball and baseball. In case of Uzbekistan there are national sports such as: boyqurgan, turon, kurash and belbogli kurash. These types of Uzbek sports are now popular not only in Uzbekistan, but internationally. Significant role played inclusion of these sports in the program of Asian Games. From that time, they became known in other countries.

Out of all Uzbek national sports the most popular is kurash. There is International Kurash Association and local Kurash Federations in about 50 countries worldwide. Starting from 1999, a series of kurash world championships were held. Recently kurash was considered to be included in the program of Olympic Games.