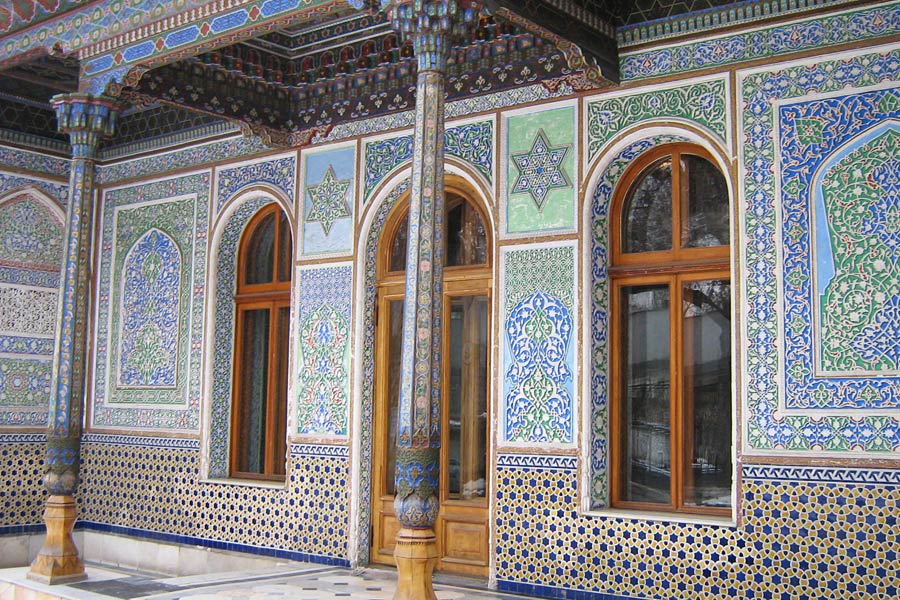 The state museum of history of Uzbekistan

The state museum of history of Uzbekistan at Republic Uzbekistan Academy of sciences is the largest and oldest scientifically-educational establishment of the Central Asia with more than 120-year-old history. Unique monuments of archeology, numismatics, ethnography are stored in a museum.

The state museum of arts of Uzbekistan

The state Museum of arts of Uzbekistan is one of the largest museums in Central Asia which has been based in 1918 on the basis of a small collection from 500 exhibits. It were products of Russian and West European art – painting, a sculpture, art furniture, porcelain, bronze. The most valuable exhibits are presented to museum expositions antique and Midle Ages arts of Uzbekistan, an architectural decor, embroideries, carpets, fabric, gold sewing, jeweller art and another.

State museum of an applied art

Applied art museum, where it is presented more than four thousand exhibits and art and craft subjects (ceramics, gold sewing, carpets, pictures, silk and jeweller ornaments) of the best handicraftsmen of Uzbekistan, have been based in 1937 on the basis of a time exhibition of handicraft art.

The museum is located in the Palace building,which was belonged to the Russian diplomat Alexander Polovtsevu known for the quivering relation to architecture and art. The building is represented by the sample of architecturally-decorative art.

Museum of the history of Temurs

The state museum the history of Temurs has been opened in Tashkent on October, 18th, 1996. The museum is erected in the centre of Tashkent to Amir Temur’s 660 anniversary. This unusual construction under the form with a dome in style of known architectural monuments. Since first days of the existence the museum became the centre of scientific thought and educational work.

Museum of memory of victims of reprisals

The memorial is located in the Amir Timur street, opposite to the Tashkent television tower, in territory of National park of Alisher Navoi. The museum of Memory of Victims of Reprisals is unique in territory of the CIS. Memory of victims is sacred.

Gallery of the fine arts of Uzbekistan

The richest meeting of products of the fine arts of Uzbekistan from the XX-th century beginning up to now, and also a unique collection of numismatics of the Central Asia are presented in the Gallery of the fine arts which have opened the doors on the eve of a holiday of Independence of Republic Uzbekistan in 2004. As a basis of the first exposition the collection of the Art gallery of National bank of foreign trade activities of Republic Uzbekistan which has been created in 1994, at the initiative of the head of the state has served.

The House museum of Ajbek is in one of old areas of Tashkent. Here in silent street Tazetdinov (Earlier Kislovodsk), in 1940 Ajbek with a family has lodged. In scientific library of a museum there are books, magazines, the newspaper cuttings, the first publications of the edition in various languages, the literature on a life and creativity of the writer, the manuscript of products of classics of east literature: Navoi, Fuzli, Hafiza, Sufi Allajara, Jassavi, etc.

Has been created in 1994 on the basis of constantly operating exhibition of suits belonging to it. In Tamara Hanum’s museum interiors of living rooms in which she has lived last years lives, its numerous scenic to a suit, record of songs, a magnificent collection of photos (1920-1980th) and manuscripts among which the published memoirs and poems of the actress are kept.

The considerable contribution to development of economy and culture of Uzbekistan of J.Ahunbabaev has brought in 1930-1940th years. At this time it took part in the organisation of irrigational and agricultural works, cotton development, participated in cultural revolution carrying out, struggle for liquidation of illiteracy and liberation of women.

The memorial House museum of the National artist of the USSR of UralTansykbaev (1904-1974) has been opened in 1981 U.Tansykbaev’s Creativity covers the period of 1920-1970. U.Tansykbaev’s heritage is huge. The basic products of the artist from museum meeting are exhibited at a memorial part and in specially built gallery.

The museum exposition is placed in the house where Gafur Guljamworked from 1944 for 66 works of literary part: photos, original documents and personal stuff of the poet, lifetime and posthumous editions of its products. In a memorial part of a museum the study, a drawing room and a rest room have taken places. Here books from a private library of the poet, a desktop, conditions and life subjects are presented.

The House museum of Muhtar Ashrafi (1912-1975) is devoted the known Uzbek composer, the National actor of the USSR, one of founders of a national opera, the conductor, all life to devoted development of musical culture of Uzbekistan. The museum has been opened for visitors in 1982.

The state museum of the nature of Uzbekistan

The state museum of the nature of Uzbekistan being at department of the Ministry of affairs of culture of Republic Uzbekistan, is the oldest scientifically-educational establishment. It is created on July, 12th, 1876. Having passed a long and difficult way of development, it has turned to the Head museum.