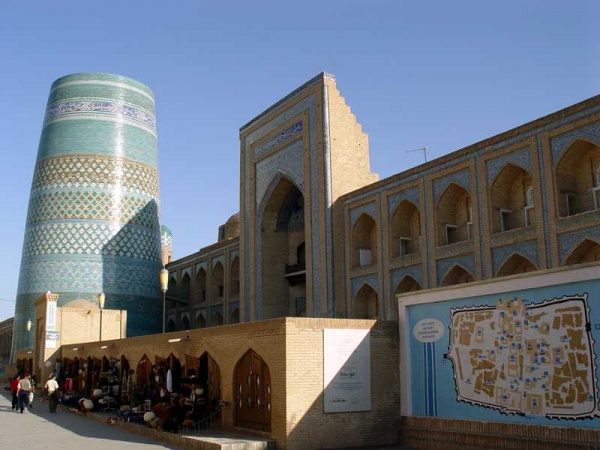 Khiva, city-museum like Rome is a lively city. Like many Oriental cities Khiva was founded on the water source of Kheyvak – in the Lower Amudarya and grew on the irrigated lands of Khorezm oasis.

Archeological researches show that the city is at least 2,500 years old. This fact served as the grounds for the UNESCO to declare Khiva as the city- reserve, and to admit its internal part – Ichan0Kala as the world historical monument. Historical data on Khorezm are given by «Avesta». Herodotus, «father of history» mentioned Khorezm and Khorezmians. Beruni wrote about ancient farming in Khorezm.

Khiva is one of few world cities where the historical buildings are preserved, in essence, the whole city under open sky. Khiva’s monumental architecture of late XVIII-mid XIX centuries formed the newly created city which even nowadays amazes us with that energy with which it was built during just two-three generations of masters. However those accidental buildings on small land slots that would be harmful under other conditions of great crush and density became the source of unusual picturesqueness and diversity of architectural forms. The very Ichan-Kala, this most dense part of Khiva became the architectural museum where the best creations of folk masters are presented to us.

By tradition the cathedral or Friday mosques used to be the spiritual center of the city. People think that remnants of construction of X-XII centuries served as basis for construction of the mosque. Djuma-mosque in Ichan-Kala was also reconstructed at the end of XVIII century, however, it preserved the lines of classical buildings of the Orient. It is a unique single-floor building without portals, arches and domes, and represents huge hall with flat roof that relys on 213 wooden carved columns of X-XVII centuries A.D. These very columns of various size, shape and decoration represent the artistic value of the mosque. Scientists think that all these specific features bring it together with ancient mosques of Arabia.

Muhammad Amin-Khan madrasah is the largest one among all madrasahs. Its specific feature consists of doubled cells. Belts of colorful brick sets and majolica tiles with plant ornaments are introduced in decoration of facades. Doors and panjaras (bars) are decorated with excellent carvings.

It is hard to imagine the medieval city with external walls and towers, without citadel inside the settlement. Khiva is not exception. Ichan-Kala has for ages been surrounded with massive fortress walls. And in mid-XIX century new wall with 10 gates was built around Khiva. Ever since the large ring of the city has been called Dishan-Kala or «external fortress».

Holy places such as cemeteries and mausoleums played a specific role in Khiva’s spiritual life. Memorial complex of Pahlavan Makhmud who was furrier by profession, athlete by composition, philosopher by spirit and poet by calling, is one of the most respected places. After his death he was canonized as a «pir» – Khiva’s saint patron. Gradually the cemetery of khan’s dynasty had emerged around Pakhlavan Makhmud’s burial place, and then ensemble of buildings adjoining the mausoleum, including the summer and winter mosques, room for prayers and premises for Qur’an reading had been built.

In medieval Khiva also was the city of scholars. Large scientific centers of astronomy, mathematics, medicine functioned here; great scholars such as Abu Raykhan Beruni, Abu Ali ibn Sina (Avicenna) lived and worked here. Greatest scientists of medieval Orient who formed «Ma’mun’s Academy» worked at the court of Ma’mun ibn Mukhammad shah. Shermuhammad Munis and Agahi were the outstanding poets of the Orient of XIX century. The city by right deserves the name of the «Pearl of Khorezm Oasis».

During the period of its prosperity Khorezm was the largest center of international trade, key point on the Great Silk Road. Trades from Povoljye, India, Iran arrived here, trade caravans departed for Middle East, Eastern Turkestan and China. Roads from Khiva led to Mongolia, and those through the Polovetsk desert – to the city of Saksin, trade city on the Volga river, and then to Russian princedoms and Europe. Archeologists are discovering new routes of ancient caravan roads, and, particularly, from Khorezm to Mangyshlak, from there to Lower Volga by sea, that prove that Khiva’s traders controlled the significant part of trade of Central Asian states with Eastern Europe.

When evening comes and the Moon – patroness of true believers – lightens the top of minarets, domes of mosques and portals of madrasahs, then it seems that you are in a magic city. Indeed, Khiva is a city from tales.