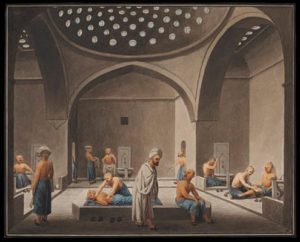 Hammam is the most frequent type of civil engineering throughout Central Asia travel. Based on detailed many artifacts and documents study, we can say those buildings had undergone numerous changes over centuries. Some archaeological finds allow scientists claim ancient times; baths were an important part over any settlement.

Functional features off traditional Asian bathhouses impose certain restrictions upon their use. For example, there was certain schedule according to which women or men could visit bath. Traditionally, eastern countries cleansings have always been proximity toward various palace complexes, mosques or madrassas. Striking example is building Anush Khan, located in Khiva.

These days you can find numerous mosques have been well preserved until our time, such as Kunzhak, Bozori Kord and so on. Interior still retains many elements that distant era. Anyone may not just freshen up, but also feel like ancient nobleman.