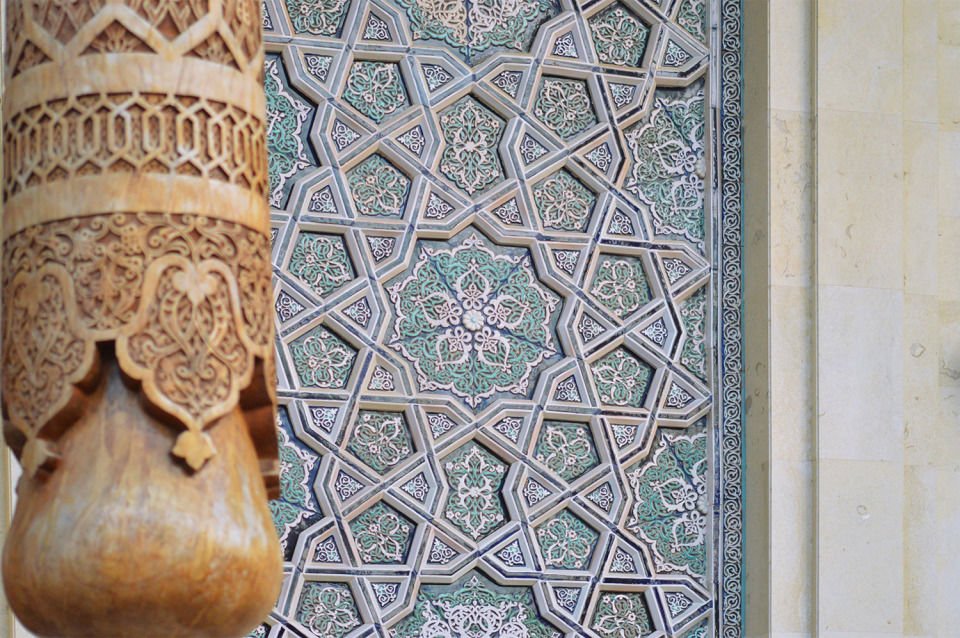 One of important elements in architecture is decoration. Ganch is a traditional peice of decoration. It was created and popular long time ago in Uzbekistan and is still widely use in modern architercures.

This element of décor is widespread not only in Uzbekistan but in many other countries. Ganch producers often take orders from Asian as well as European countries. Last few years our ganch makers were especially busy with overseas oders. One of the most productive ganch maker in Uzbekistan is an assiociation called “Usto”. This association is managed by well known master of ganch making M. Mansurov. This organization consists of many professional and talented people who are involved in decoration of new constructions in Uzbekistan. They decorated famous “Turkiston” concert hall, different subway stations, Oliy Majlis, a number of theaters in Uzbekistan and building of Exchange Center. Those are not the only projects but the most famous ones.

Uzbek ganch makers were even invited to Kazakhstan to do work there and took participation in international art and craft exhibitions in such countries as France and Malaysia. Malaysia appreciates Uzbek ganch making. Uzbek masters decorated many buildings on the territory of Malaysia. Among them different modern constructions in Kuala Lumpur and art gallery “Perdan” located on Langkawy island. A number of incredible constructions were built at the beginning of 20th century. The beauty is in their domes of golden color and small elegant towers on the top of them.

When the decoration of “Perdana” gallery finished, the result was beautiful. Langkawy Archipelago, where the gallery was built is a set of small islands. The central island is calle Pulau-Lankowy and is situated among numerous islands of incredible beauty. The main island is a place of versatile and bright flora. The nature gave this place all the brightest and richest colors. When you enter “Perdana” you can see that inside decoration of the building corresponds to the outside world. Both outside and inside worlds are in harmony. That harmony was achieved by Uzbek masters who used gancha for decoration. Many elements of interior and exterior of the gallery were decorated by Uzbek masters: domes, different panels, collumns, drums, walls, ceiling and even lamps.

Ceiling of the central hall of “Perdana” is of dome shape. It was decorated using bright green colors in Bukharian style. For ceiling there was used a “pah pardoz” technique. There are three rows of collumns in the lower part of the dome that have images of five stars on them. Below are ganch figures that are called drums.  Three-row stalactites with five-pointed stars decorate the lower part of dome. There are ganch figures named as drums below. Different drums have different design. Because of this versatility, drums add to the originality of the interior and show oriental style. The rest of the ceiling besides dome is flat. This area consists of squares and rectangular elements that are decorated using ganch on the mirror background. This is traditional technique and it was introduced by Usto Shirin Muradov. Uzbek masters went beyond traditional thinking in ganch making. They used their creativity to mix Asian traditions with European styles. Significant role in the success of the gallery design played lighting. Dark blue light gives the feeling of mysterious place.

One of other oversea achievements of “Usto” masters is a decoration of a mosque. The mosque is located in Kuching seaport, Saravak region, Malaysia. The top of the mosque is also a dome. In the center this dome has yellow background and writings from Koran at the foreground. The lower part of the dome is colored blue. There are images of foliage and flowers framed in rhombus shapes that decorate the blue background. At the top of three rows of collumns there are some shapes that at the bottom become stars. Star shaped collumns are used also for drums. Some drums are also decorated with red stars on white background. The composition of such patterns looks like a flower that grows everywhere in Malaysia. The flower is called red hibiscus. It has five petals each symbolizing one principle of Islam.

“Usto” ganch master were also invited to do work in Chimkent, Kazakhstan. The job was to decorate the museum dedicated to victims of repression. The museum has the roof in a shape of dome. The ceiling was decorated with sayings from Koran in the center and at the basis of the building. The basis is decorated in iroki style. This style was wide spread as a decoration in Samarkand architecture. Uzbek masters who were invited to Chimkent knew and practiced this style many years and achieved perfection.

Uzbek ganch masters have their own unique style. Their work is distinctive due to warm, light and interesting result. The services Uzbek ganch makers provide are unique as well. All the work is done manually. With their own hands masters enrich every detail with love. That is why their work is so appreciated in all the places of the world.

When Kazakhstan and Malaysia invite Uzbek masters of ganch making, this is the evidence that these countries have similar architectural preferences and cultures are close. Bigger panels are decorated using pah pardoz technique. For smaller panels more appropriate technique is choka pardozt. Decoration using this technique gives soft result. Another technique is called lulya pardoz. It is usually used for gilding and is becoming more and more popular. Standard choiceof ornament include: geometrical figures, foliage and flowers, writings. Majority of masters in Tashkent choose to mix images of foliage and flowers with other ornament. Uzbek ganch makers are not only using traditional patterns to work with, they create new styles. Some of their recent introduction includes a ganch carving that reminds Gothic Baroque. Ganch carvig is popular first of all within Uzbekistan. The population loves expressiveness of ornament and decorates with ganch rooms in their houses. When Uzbek masters work outside the country, they consider nature, traditions and history of the country where they work. As a result, every time there is something new, something creative. This type of art is constantly develops and moves further in ganch patterns and techniques.