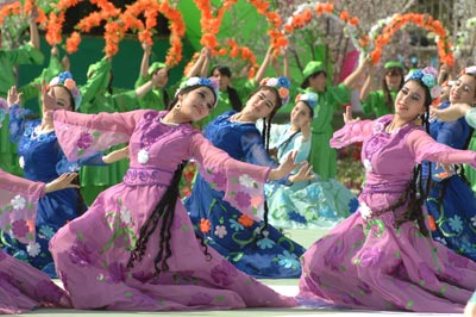 An ancient popular holiday Navruz (Navruz Bairam) is celebrated on March 21st during the spring equinox. Navruz is a holiday of nature”s awakening and the beginning of sowing; it has retained in its ritual the features of Zoroastrianism. Every spring great celebrations and festive fairs were arranged in the agricultural oases of ancient Uzbekistan. According to the traditions, even today baursak shortbread and the ritual dish sumaliak are cooked at homes. Usually after the festival the fieldwork begins, it was also accompanied with ceremonies in the past, for instance, prior going to a field the horns and necks of the oxen would be oiled. The most respected and the oldest member of the community would start the first furrow. During the years of independence the festival has taken on new scope and depth. It has become a holiday of friendship, unity and fraternity for all nations living in the country. Colorful dramatized performances reveal the philosophical and poetical significance of Navruz and its role in people’s history.

The traditional forms of public relations in Uzbekistan include first of all the Makhalla, or neighborhood community; unions of men, djura; trade unions of craftspeople. The Uzbek makhalla has a thousand-year history and is a center of family life and religious ceremonies and celebrations. The rituals, the ways of ceremonies are carefully preserved and passed from generation to generation in makhallas. As a rule, the traditional makhallas have active mosques. An ancient tradition of mutual assistance – khashar, is also preserved. Usually by way of khashar neighbors and relatives help to build a house, and equip their district with modern amenities. The makhalla in Uzbekistan has become a guardian of cultural traditions and morality of the Uzbek people, a legal self-governing mechanism of citizens. Today the makhalla is a community of families united for the cooperation and mutual assistance both in the districts of individual housing, traditional parts of the towns, and in multi-storied houses and the streets of industrial towns. Peoples of different nationalities live in the makhallas peacefully and in accord. The network of 10,000 makhallas embraces the entire territory of the republic and is an important link in strengthening civil society. The entire population of Uzbekistan accepts it as an efficient form of organizing public life. The law adopted on December 2, 1992, defines that gatherings are citizens” self-governing bodies in resident areas. They elect a chairman (aksakal – white-bearded) and his counselors for the term of 2.5 years. The public non-government fund “Makhalla” is the coordinating body.