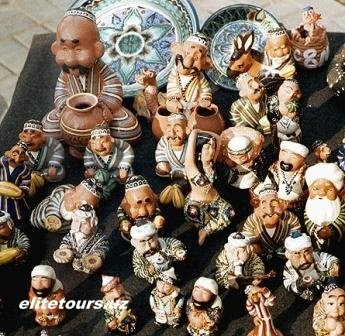 Ceramics is considered to be among the first types of art that people started practice in Central Asia. Ceramics started its existence with simple kitchen utensils. With the time, when new materials and new processing techniques were found, ceramics developed into a fine art. from 9th to 11th centuries ceramics production was on its peak. At that time Chach was a big settlement that specialized on farming. The population of this settlement produced interesting pieces of ceramics. Their products were spread on the territory of current Tashkent and Taskent Region.

Capital of Chach was Binket. Some researchers think that Binket was located right on the territory of todays old Tashkent. Trade in Binket was developed due to its convenient location. A lot of roads were passing by this town. Commerce thrived in Binket, and its residents engaged in cottage industry and agriculture. Among the goods produced in Chach at that time, and sold to other places, special role played crockery. A lot of ceramics were found in modern times when construction of modern buildings took place in old area of Tashkent. These findings allowed having more complete picture of development of pottery in Binket.

At that time in Binket ceramics developed into creative art. Design and decoration of items becomes less and less primitive. At the end, design became sophisticated and decoration colorful and beautiful. One of the major influences in decoration of ceramics played introduction of glazing technique and engobe. After that traditional ornament and colors was formed.

Despite being geographically in the same region ceramics of other cities, such as Khorezm and Samarkand, differ from ceramics Binket ceramics. Of course Binket ceramics has common features with ceramics of other regions, but at the same time it has its own obvious distinctive style. The difference is that Binket masters used mainly white colors for background and national ornament on the foreground. Very often paintings included elements with animals.

Presence of animals in ornament is discussed in publications that describe the history of Chach. There are also separate articles that are dedicated solely to Chach ceramics. Researches found out that in decoration of ceramics at that time was very popular images of different animals.