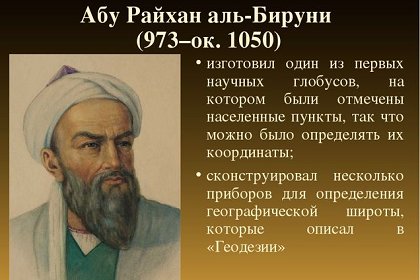 Scientist also prominent within Europe, there called Alboron like many believed that man was Spanish monk.

On explorer account 150 scientific papers. But only approximately 30 have survived till our time. Most work related mathematics.

Next working, Fundamentals of Star Science, differs off other works; has written two languages Persian either Arabic. This source you can get answers 530 questions upon geometry, arithmetic, astronomy, geography, natural astrology, historical events.

Historical heritage this excellent scholar is large-scale. He made significant contribution not just sciences development, eastern world culture, yet also our entire planet.