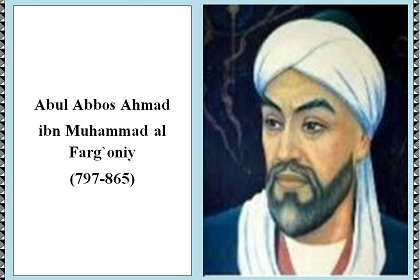 History of Central Asia always introduces historical personalities of different epochs. To visit amazing places is much more interesting using services of tour operators of Uzbekistan and advantage both in the planned organization and in providing the unique information about history of great people. One such person is Al Fergani. The unknown remained a great deal about his life, as well as his place of origin. It was found that he was born in 798. From his name also we may conclude that his homeland is Fergana city, or at least, it was a place where he grew up and studied. Some sources rely on him as a Persian scholar. Talent and desire for knowledge contributed to succeed in different sciences. Even at that time the world knew him as an astronomer, mathematician and geographer.

In a later time, Al Fergani lived in Baghdad and worked at Al Mamun Academy, which was called the House of Wisdom. It was a place where eminent scientists used to come from all over Central Asia. Among them was one of the most outstanding mathematicians of that time Al Khorezmi, and mutual exchange of experience allowed Al Fergani to self-improve much faster.

It should be noted that in the 19th century astronomy was the most widespread of all sciences, and huge deposits were made in its development. Large funds were allocated and the necessary resources were provided. An example of this is the construction of two observatories, which were equipped with the most modern astronomical equipment of that time and advanced tools.

Those observatories allowed to observe the cosmic sky and movement of stars, simplifying mathematical calculations. As a result, a group of scientists, including Al Fergani, compiled a set of tables with exact coordinates of celestial bodies. During his life he extensively  had to travel  in Central Asia and beyond.

In the year 861, near Cairo, Al Ferghani designed a special device to determine the distances between planets. There he invented another device, which served when calculating the multi-dimensional Nile river. He lived in Cairo till the end of his days.